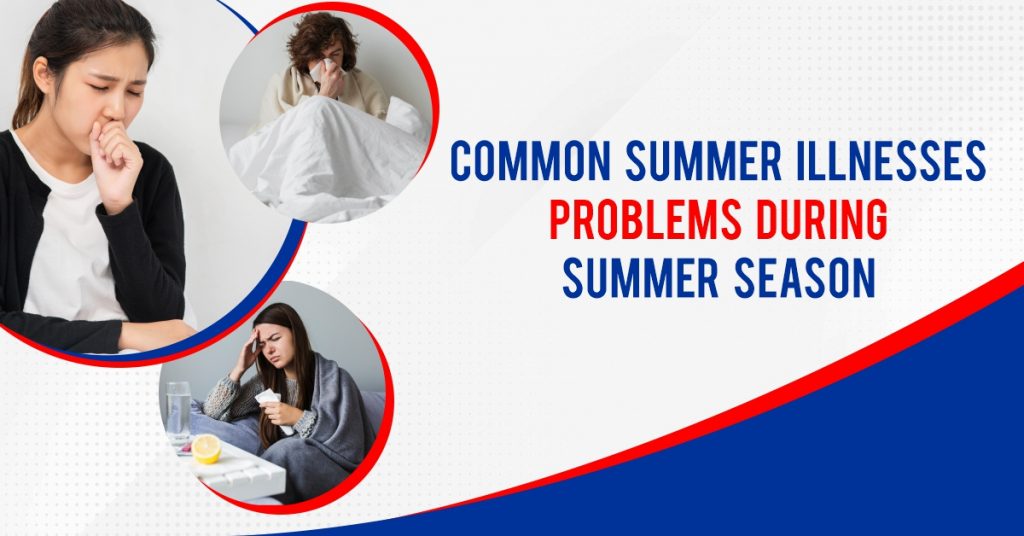 We all know that certain diseases are more prevalent in certain seasons than in others. Winter brings colds, flu, and coughs, the monsoon produces dengue and malaria, and summer causes diarrhea.

As well as these diseases, summer brings along several other health problems, ranging from simple ones such as headaches, skin rashes, sunburns, etc. to severe ones such as measles or jaundice.

During the summer, it is not just the unbearable heat that can harm you but also a host of diseases. It is usually the summer season in India that can cause common summer illnesses between March and June which is the warmest.

All parts of the body are affected by heat, including the skin, eyes, and digestive system. If you don’t take precautions, the scorching heat and unrelenting dryness lead to a common summer disease.

Contaminated food or water is the most common cause of food poisoning. Infected people may experience stomach aches, nausea, diarrhea, and vomiting as a result of bacteria, viruses, toxins, and chemicals.

In humans and animals, prolonged exposure to sunlight is harmful due to UV ray penetration in the body. People with low melanin levels are more susceptible to skin cancer, as melanomas are caused by it.

On hot summer days, people are likely to develop redness, dryness, itching, and cracks on their skin if they are exposed to the sun for too long. Following exposure to a cold, the victim usually experiences chills, nausea, vomiting, feeling feverish, and may even display flu-like symptoms.

It is possible to develop blisters and to peel the dried/dead skin at a later stage if the skin was burned too much. The best way to prevent sunburns is to use sunscreen with SPF 30 or higher. You should also take precautions to maintain the moisture of your skin.

Summer is a time when chickenpox is one of the most common diseases. The rash begins as fluid-filled, red, small, and itchy rashes, which are accompanied by a fever of up to 102 degrees Fahrenheit, and eventually develops into fluid-filled blisters that crust or chip over, leaving a scar on the skin.

People with diabetes, cancer, blood pressure problems, HIV, tuberculosis, on certain steroids, or those who have a weak immune system are susceptible to chickenpox. An infected individual transmits the virus either by sneezing or coughing droplets into the environment.

It is also possible that the virus causing chickenpox may lay dormant in some people until the appropriate weather conditions come along to propel it again.

Aside from blisters, scabs, and itchy skin, chickenpox is also characterized by high-grade fever, headache, and loss of appetite that usually lasts for more than a week or two.

A person’s ability to cool down can also be affected by chronic medical ailments such as circulatory problems, heart disease, and obesity. A person with high blood pressure, heart disease, or depression can have their ability to feel heat diminished by certain medications.

An older adult who experiences cramps or early symptoms of heat exhaustion, such as weakness, dizziness, nausea, or heavy sweating, should also seek medical attention.

When you are being prescribed a fluid restriction for a condition such as congestive heart failure, kidney or liver disease, consult your physician on how much water you should drink.

Approximately 300,000 Americans contract Lyme disease every year, which is an inflammatory illness caused by ticks. After an infected tick bites you, you may experience a rash, flu-like symptoms, joint pain, and fatigue.

Generally, it is curable with antibiotics if caught early. However, if left untreated, the American Lyme Disease Foundation (ALDF) reports that it can result in severe headaches, arthritis, cardiac problems, and even neurological disorders.

In the study of Lyme disease, “approximately two-thirds of Lyme disease cases reported between 1992 and 2006 exhibited symptoms in June, July, or August” which means in the scorching of summer Lyme disease spread the most.

This means that using a tick repellent (and checking yourself for ticks) while spending time outside during the summer months is super important.

A common cause of jaundice is water contamination. The main cause is the consumption of contaminated food and water, as well as Hepatitis A. Infections spread by oral feces, cause a condition known as Hepatitis A causing jaundice.

It occurs when an uninfected person consumes food or water that has been contaminated with human feces. This disease can either be food-borne or water-borne.

In the absence of treatment, this disease can adversely affect the function of the liver, resulting in excess bile production. Yellow discoloration of the skin, mucous membranes, and the whites of the eyes, light-colored stool, dark-colored urine, and itchiness are some of the symptoms.

By contaminating food and water sources, the bacteria that cause the outbreak begins to grow. Typhoid symptoms include fatigue, loss of appetite, abdominal pain, and high fever.

Vaccination against typhoid is carried out as a preventive measure. Vaccines are administered in the form of medication or pills so that the weakened bacteria can be injected in order to build immunity against them.

Dehydration is another common health problem during the summer season in India. It occurs when the amount of water consumed does not meet an individual’s needs.

Sweating, caused by the summer heat, can lead to a loss of salt and water from the body. To ensure the continued performance of bodily functions, it is essential to stay hydrated to compensate for any losses incurred.

It is most likely that you will suffer from hay fever this summer, and even if you have never had it before, that does not mean you will be immune. Hay fever can develop spontaneously in many people and they are completely unprepared to handle it.

Therefore, it is prudent to keep antihistamines handy should symptoms arise. As a result of air pollution, increased stress levels, and genetic predispositions, the number of hay fever cases has increased.

Whatever the reason, it can cause a tremendous amount of trouble for both personal and professional lives.

High pollen levels contribute to more than just hay fever symptoms, such as sneezing, running noses, and itchy eyes. However, those who suffer from breathing difficulties such as asthma are likely to be hit hard as well.

Those who spend a lot of time outdoors and are exposed to excessive humidity are particularly vulnerable. Several factors could explain why asthma becomes more prevalent during the summer.

For adults and children alike who are facing breathing difficulties, it may be a good idea to keep medication and inhalers readily available and to stay inside when pollen counts or humidity are high.

Easy and Effective Tips to Stay Healthy During Summers:

Following are a few quick tips that will help you avoid the wrath of summer diseases: