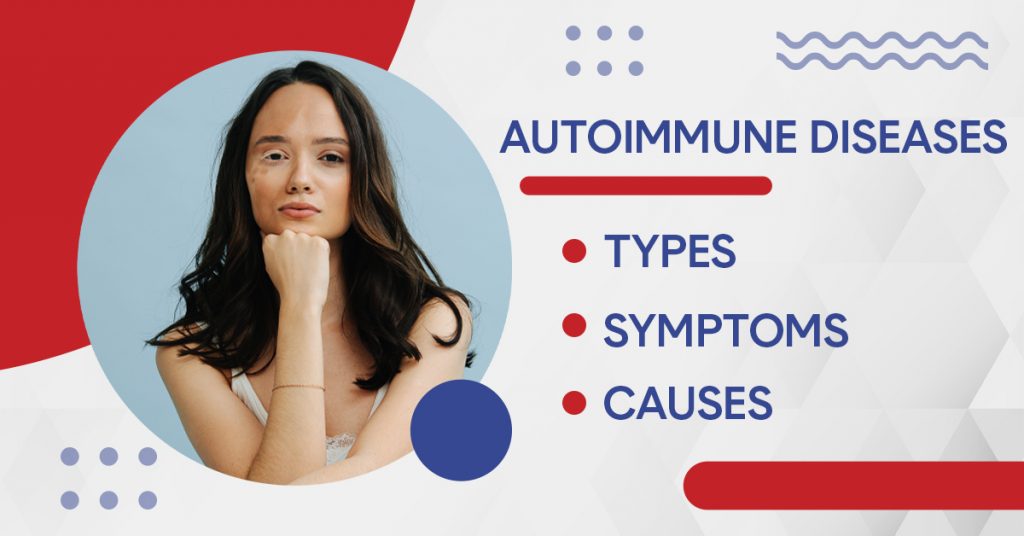 What is an Autoimmune Disease?

Our body’s immune system is made up of various organs and cells which protect us from bacteria, parasites, viruses, cancer cells, etc. But what if the immune system backfires and accidentally starts attacking our body rather than protecting it. This kind of disease is known as Autoimmune Disease.

There are over 80 known autoimmune diseases. Numerous diseases and conditions can lead to ulcerative colitis, such as lupus, rheumatoid arthritis, and Crohn’s disease.

Due to the effect of autoimmune diseases on our body, various types of tissues and organs get affected and they can directly or indirectly cause the problems like pain, tiredness (fatigue), rashes, nausea, headaches, dizziness, and more.

How do Autoimmune Diseases Work?

At its most basic level, autoimmune illness arises when the body’s natural immune system defenses assault healthy tissue. This is a complicated process that is under research.

When a virus or infection enters our body, our immune system percept it and comes into action to attack it but sometimes healthy tissues and cells get attacked in the response, resulting in autoimmune disease.

Insulin is produced by the pancreas and helps to regulate blood sugar levels. Insulin-producing cells are targeted and destroyed by the immune system in type 1 diabetes mellitus.

High blood glucose levels may damage blood vessels as well as organs such as the heart, kidneys, eyes, and nerves.

The immune system targets the joints and causes rheumatoid arthritis (RA). These onslaughts cause redness, heat, aching, and stiffness in the joints.

Unlike osteoarthritis, which often affects people as they age, RA can strike in your 30s or earlier.

Skin cells naturally shed and develop when they are no longer needed. Skin cells multiply too quickly in psoriasis. Overgrowth of extra cells leads to reddened patches on the skin, which can be accompanied by silver-white scales.

Swelling, stiffness, and pain in the joints affect up to 30% of patients with psoriasis.

MS attacks the myelin sheath, the protective coating that protects nerve cells in the central nervous system. If your myelin sheath is damaged, messages traveling between your brain and spinal cord are slowed.

Numbness, weakness, balance concerns, and difficulty walking are all indicators of nerve injury. The different types of disease are characterized by different rates of progression. According to a 2012 study, almost half of persons with MS require assistance walking within 15 years of diagnosis.

Although lupus was originally thought to be a skin disease because of the rash it causes, the systemic form, which is the most common, affects a variety of organs, including the joints, kidneys, brain, and heart.

Rashes, joint discomfort, and fatigue are the most common symptoms.

Many disorders cause inflammation in the intestinal lining under the term inflammatory bowel disease (IBD). This disease can attack different parts of the gastrointestinal tract.

The adrenal glands, which generate the hormones cortisol and aldosterone as well as androgen hormones, are affected by Addison’s disease. When low in cortisol, the body is less able to consume and store carbohydrates and sugar (glucose). A lack of aldosterone causes sodium loss and an excess of potassium in the circulation.

Weakness, weariness, weight loss, and low blood sugar are some of the symptoms of Addison’s disease.

Graves’ illness is a disease that affects the thyroid gland in the neck, leading it to overproduce hormones. Thyroid hormones regulate metabolism, or how much energy the body uses.
When your body produces too many of these hormones, it causes symptoms including anxiousness, a racing heart, heat intolerance, and weight loss.

Exophthalmos, or bulging eyes, is one possible indication of this condition. According to a 1993 research, it can occur as part of Graves’ ophthalmopathy, which affects about 30 percent of people with Graves’ illness.

This illness attacks the glands that lubricate the eyes and mouth. Sjögren’s syndrome is characterized by dry eyes and mouth, although it can also affect the joints and skin.

Nerve impulses that assist the brain control the muscles are affected by myasthenia gravis. Signals can’t direct muscles to contract when connectivity between nerves and muscles is disrupted.

Muscle weakness is the most common symptom, which worsens with exercise and improves with rest. Eye movements, eyelid opening, swallowing, and facial motions are all frequently affected.

When the immune system targets blood vessels, autoimmune vasculitis develops. As a result of the inflammation, the arteries and veins constrict, enabling less blood to flow through them.

This disorder results in a lack of an intrinsic factor, a protein produced by stomach lining cells and required for the small intestine to absorb vitamin B-12 from the diet. Without enough of this vitamin, anemia develops, and the body’s ability to synthesize DNA is compromised.

Pernicious anemia is more common in older adults. According to a 2012 study, it affects 0.1 percent of the overall population, but nearly 2% of persons over 60.

Gluten-containing foods such as wheat, rye, and other grain products are off-limits to patients with Celiac disease. When gluten reaches the small intestine, the immune system attacks and inflames this part of the digestive system.

Celiac disease affects about 1% of persons in the United States, according to a 2015 research. Gluten sensitivity has become more frequent, even though it is not an autoimmune disease but can induce similar symptoms including diarrhea and abdominal pain.

Affective diseases have unknown etiology. These factors may contribute to their development:

Even though there are many different forms of autoimmune disorders, many of them have similar symptoms.

Diseases of the joints and muscles:

Diseases of the digestive tract:

Diseases of the skin:

Diseases of the nervous system:

How to Diagnose Autoimmune Diseases?

Autoimmune symptoms are sometimes vague, overlapping with symptoms of other illnesses, notably other autoimmune disorders. It can be difficult to identify an autoimmune disease accurately because of this.

Lupus, for example, can similarly damage the joints as rheumatoid arthritis, but the symptoms are usually milder. IBD has symptoms that are similar to celiac disease, but it is not caused by gluten use.

Furthermore, depending on the ailment, the diagnosis method varies.
However, blood tests are frequently required. Antibodies produced by the immune system can often be used to diagnose an autoimmune disease.

These are the tests that your doctor can order to look into all areas of your symptoms.

How to Autoimmune Diseases Treated?

Autoimmune illnesses cannot be cured in general, however, they can be managed in many circumstances. Traditionally, therapies have included: