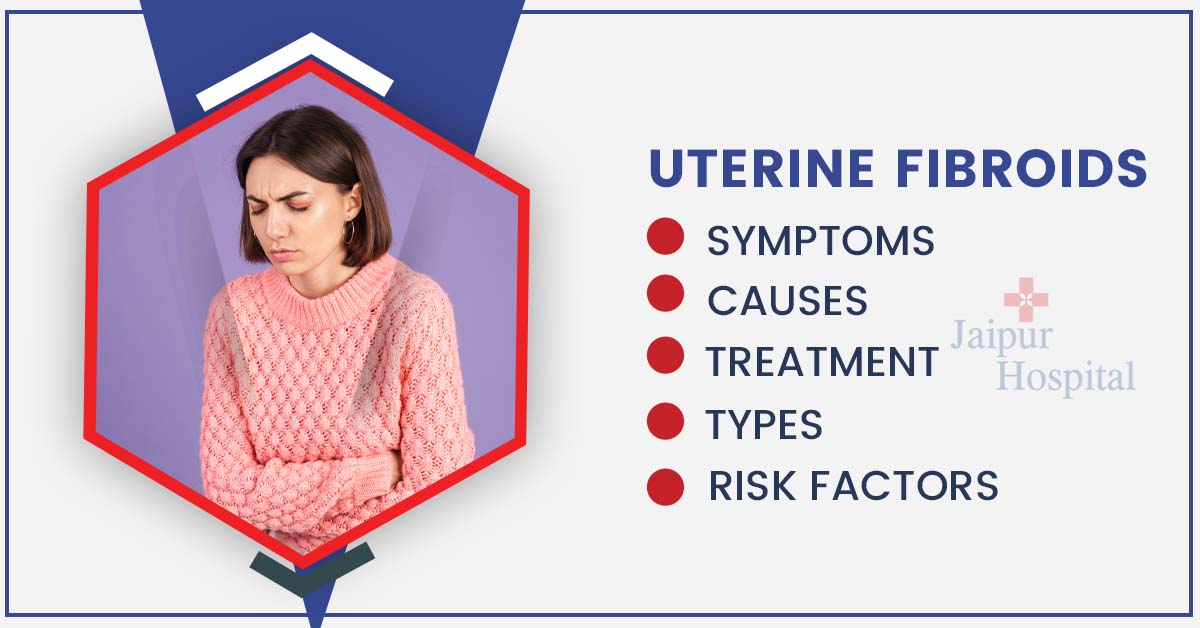 What are Uterine fibroids?

Leiomyomas, or uterine fibroids, are growths comprised of the muscle and connective tissue from the uterus’s wall. Typically, these growths are not malignant (benign).Your uterus is an organ with a pear-shaped shape on one side of your pelvis. It is similar in size to a lemon when it comes to the size of your uterus. During pregnancy, it is where a baby develops and grows.

A fibrous tumor may appear as a cluster or as a single nodule (one growth). There are fibroids in a wide variety of sizes, ranging from 1 mm up to 20 cm (8 inches). A watermelon is an example of the size they can reach. These growths may appear on the outside of the uterus, inside its main chamber, or even in its wall. The size, quantity, and placement of fibroids in and on your uterus can all vary.

Fibroids in the uterus can cause a wide range of symptoms and different women will experience different symptoms. Your treatment strategy will be based on your particular circumstance because fibroids can be highly individual.

Fibroids come in a variety of varieties. Depending on where they are in or on the uterus, the kinds vary.

Although there are several theories about the origins of uterine fibroid, no definitive cause has yet been identified. The following factors have been identified by clinical experience and research:

Urinary tract complications are occasionally possible. Even though it is uncommon, large fibroids can prevent a fertilized egg from implanting in the womb or block the fallopian tubes, which can lead to infertility. Pregnant women with fibroids may also experience labor complications and, in rare instances, miscarriage.

The procedure of Uterine fibroids:

Your doctor and you can think about a number of options.

It is recommended that you wait four to six months after surgery before attempting to get pregnant. It is common for women to experience symptoms of myomectomy to disappear after the procedure. However, in some people, the fibroids return.

If the surgeon was successful in removing all the fibroids, it will depend on how many you have. In addition to performing abdominal surgery, your doctor may perform a myomectomy or use a hysteroscope or laparoscope to remove the fibroids without needing to make a significant incision on your abdomen. MRI-guided ultrasound radiation can also shrink or destroy fibroids using a more recent technique.

The majority of fibroid tumors are asymptomatic and do not need to be treated. In actuality, they frequently get smaller or vanish after menopause. But if fibroids are producing bothersome symptoms, there are a number of medical remedies that can be helpful.

Depending on the symptoms, how severe the symptoms are, and where the fibroids are located, a doctor may advise a different course of treatment.

Medication is the initial course of treatment for fibroids. Some potential fibroid medications will be covered in more detail in the sections that follow.

The body produces less estrogen and progesterone when taking a medication known as a GnRH agonist. Foloids shrink as a result. Menstrual cycles are stopped by GnRH agonists without having an impact on fertility after treatment is over.

Hot flashes, a propensity to perspire more, vaginal dryness, and, in some cases, a higher risk of osteoporosis are all menopause-like symptoms that can be brought on by GnRH agonists. GnRH agonists should only be used temporarily. These drugs may be prescribed by a doctor to a patient in order to shrink fibroids before surgery.

Ibuprofen is an example of a nonsteroidal anti-inflammatory drug (NSAID) that can lessen fibroid pain but not bleeding.

Oral contraceptives assist in regulating the ovulation cycle and may lessen the discomfort or bleeding experienced during periods. The use of low-dose hormonal birth control does not cause the growth of fibroids.

The use of progesterone-like injections like Depo-Provera or progesterone intrauterine devices like Mirena is also an option.

A woman’s likelihood of developing uterine fibroids may be influenced by a number of factors, such as the following:

Fibroid risk-lowering factors include the following:

The diagnostic procedures listed below can aid a physician in identifying fibroids and ruling out other conditions: